In short: Inflationary concerns have risen, but they are likely to be temporary. Also policymakers are unlikely to intervene and risk derailing the recovery.

There’s been continued progress with the Covid-19 vaccine rollout, with more vaccines being approved and several nations, notably the UK, US, and Israel, being significantly faster to vaccinate their population than expected. This has turned investor focus to the post-Covid landscape, where the world is able to reduce restrictions and life (and economies) can begin to return to normal.

One of the key concerns pre-occupying markets is inflation – put very simply, inflation is when prices of goods and services increase during a specific time period. To lessen the effects of Covid-19 on the economy, governments have increased their spending and pumped money into the economy by cutting interests rates. These measures are known as quantitative easing, and while they help stimulate the economy by encouraging consumption and investments, it often comes with increased inflation. The worry here is that we see a rush of 1970s style inflation, which was caused by the 1973 and 1979 oil crises.

It has been quite a while since the world worried about inflation, especially since it has been below 2% for so much of the last decade - which is the target of most central banks. However, much of the market’s current apprehension focuses on the potential for higher inflation in the future. Sustained stronger inflation would be difficult for markets because it means that central banks will need to raise interest rates (which typically sees lower bond prices) in order to dampen the economy - and by extension, inflation. It is important to point out that much of the stock market improvement has not yet been reflected in the underlying economic picture, it is built upon long-term expectations. So, any cooling of the economy could also mean that companies future earnings are lower which would also weighs on share prices.

However, we believe that there are several reasons that central banks and government policy makers will continue to provide significant stimulus. And, if the recovery is derailed, the incentives remain for more stimulus to be delivered, which should support both bond and share prices. 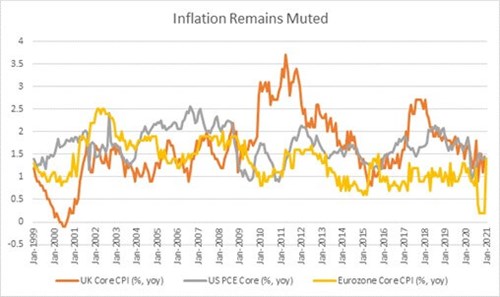 We believe there are three key economic reasons that will keep inflation muted in the longer term.

This is not a normal recovery
Firstly, the current economic state is not a normal recovery and it has not followed a normal recession – when a country experiences a period of economic decline for at least two quarters (six months) in a row. Capacity utilisation, a measure that captures how much slack there is within an economy, is understandably still very much below its pre-Covid levels. This is because of the service sector, which remains affected by restrictions either being completely closed as in the case of pubs in the UK, or only being partially open as is the case with takeaways. Also, while the manufacturing sector has seen less impact from Covid-19, it has not been unscathed.

The labour market remains fragile and wage pressure will remain muted
Secondly, we need to consider unemployment. In the UK and Continental Europe there have been large scale government programs to provide support to firms so they can retain their workers. This has kept unemployment from rising significantly, although it has understandably increased. However, when you look at the United States, where the government did not introduce support measures to encourage firms to retain workers, unemployment rate has been increasing at a worrying rate - recent initial jobless statistics show that first time unemployment claims, which reflect people losing their jobs, are currently above those the worse week of the financial crisis in 2008-09. So, until economies and unemployment figures return to their pre-crisis level, it is difficult for central banks or governments to become too cautious about inflation.

US GDP, which calculates the value of goods and services the country sells, is expected to return to pre-crisis levels shortly, although unemployment is expected to take until 2023 to go back to more normal levels. This is why the Federal Reserve, the US central bank, is currently forecasting its next interest rate hike in late 2023. The UK, even with the swift vaccine rollout, is not expected to return to pre-crisis levels until the third quarter of-2021 (albeit notably almost a year earlier than the IMF (International Monetary Fund) had predicted as recently as October) and unemployment is not expected to return to the 4.0% mark until 2024. This points to a slow labour market normalisation ahead.

Given wage inflation was muted when unemployment was at a record low in the UK and US, the current concerns given the excess labour overhang is not a significant concern for wage inflation. And while the pent-up demand will be facilitated by the significant forced savings accumulated by consumers, these savings can only be spent once. Also housing, the largest single component of inflation across developed markets, has seen a deceleration as labour market uncertainty weighs on individuals’ willingness and ability to absorb higher rents. 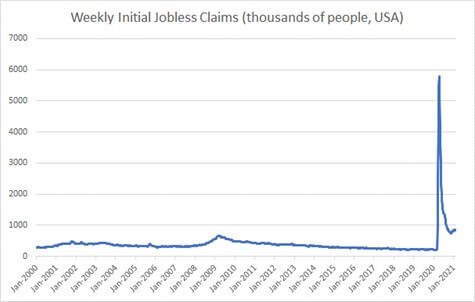 A temporary, and very welcome, rush of activity won’t cause persistent inflation
Finally, concerns exist around the potential for a strong inflationary boost to come when economies reopen. We still expect that the reopening path for economies will be gradual, there will be no single-day victory over Covid. This will mean that the increase in activity, and price pressures will also be gradual, and the current fiscal support, being provided in the UK and Europe, should be gradually withdrawn. This is also largely being used to assist households and businesses financially during lockdown and is necessary to offset greater economic scarring. This is a key focus for governments as the long-term negative consequences of economic scarring, most evident in lower educational achievement, missed employment opportunities, decreased private investment and entrepreneurial activity, should not be underestimated. However, as conditions normalise that support will evaporate, and we see this fiscal spending as being relief not classic stimulus.

It is also worth considering that if there is a stronger than expected boost to economies as they reopen, then we would see stronger employment growth that would allow governments to withdraw their support quicker. But as mentioned above, the return to full employment is likely to be several years away.

So, why should I worry about inflation?
There are two good reasons for higher inflation in the near term; the impact of base effects from last year’s growth shock and a rise in activity from pent up consumer demand – which is where consumer spending rises above the average following a period of decreased spending. But we don’t believe they will have a long-lasting effect.

Base effects will almost certainly see inflation rise in the near future
Inflation is typically looked at on a year-on-year basis. This means that you compare a basket of goods in January 2020 with one in January 2021 to see how much their prices have risen. Comparing oil prices now to those of last year, you can see that this base effect will drive inflation higher. However, markets and central banks are (or should be) well aware of base effects. What we are seeing at present is a return to normal in oil price levels, but without a continued and sustained rise in oil prices going forward, this impact will tail off later in the year. There is much less impact on consumers’ real income from a rise or fall in oil prices since the weighting of petrol/diesel is about half what it was in 2012 (6% down to 3% in the US for instance).

Similarly, the end of the VAT cuts in Germany and the UK would also lift inflation, and while these are not likely to occur until the economy is on a better footing, this would again be a step increase. It will be important to watch these changes, but if inflation’s increase has no momentum behind it then policy makers are unlikely to act. 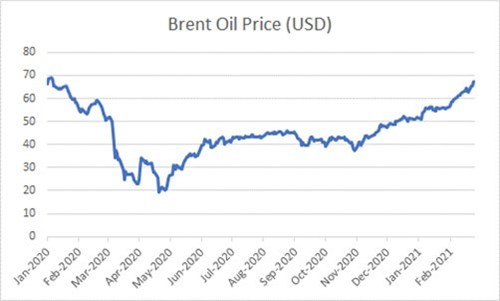 Pent up demand boom won’t last forever.
There has been a significant rise in household savings, much of which has been forced since shops, restaurants, and tourism have been significantly restricted in their activities. While people are still able to shop for goods online, accelerating the shift away from the high street, there has been little that people can do to substitute those services that they would have bought. For instance, UK barbers have been closed for some time, but someone does not have three haircuts because they have missed a monthly appointment. This does destroy economic value that cannot be replaced.

Looking forward, entertainment and hospitality are the key activities people have reported missing[1] during lockdown so these areas might see a spike in inflation as restrictions are lifted, but many service firms will also be keen to expand their activities and will likely increase hiring to cope with demand, so supply of such services will increase. While there may be an outstripping of demand as the economy finds a new equilibrium, there is unlikely to be a sustained inflationary rise, without people altering their long run consumption habits. But it is unlikely that people will still be exhibiting the post-lockdown burst of celebratory activity, although not impossible. 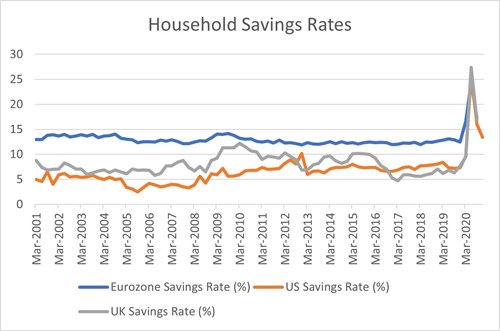 What does this mean for our Plans and the outlook?
In the last couple of weeks, there has been a decline in both share prices and bonds as rising inflationary concerns are making the market nervous. This means that portfolios are benefiting less than they might normally from diversification - where you hold a mix of investment types from over the globe. To help weather conditions such as these, we have been positioned in shorter term bonds as they typically see less impact from rising rates. At the same time, our high-risk allocation (shares, Emerging Market bonds and property) is tilted towards those markets that we believe will benefit from the continued recovery and normalisation of the economy. Investing remains a long term activity and while short-term market volatility (ups and downs) doesn’t always feel like a good thing, it can be a positive for performance in the longer term.

N.B. All data is sourced from national statistics offices or Bloomberg