The results of 2016 EU referendum took many by surprise, and the resulting negotiations between the UK and the EU to agree the withdrawal process have been far from smooth. The inability to agree a clear plan has created a climate of uncertainty, directly affecting economies and stock markets in the UK and beyond. In this blog, we look at the potential impact on markets in a post-Brexit world and what this might mean for your investments.

Brexit: What’s going on?
In early July 2018, the UK Cabinet agreed a Brexit negotiation position, known as the Chequers Plan. In a nutshell, the Government wants trade ‘harmonisation,’ essentially a Free Trade Agreement for goods, an end to freedom of movement for labour, and new arrangements for services (such as banking, insurance or communications) to allow greater regulatory flexibility.

Currently, we know when Brexit will happen and how long the transition should last, but all other details remain largely up for discussion. To borrow from American political figure and businessman, Donald Rumsfeld, this makes Brexit a ‘known-unknown’. From an investing perspective, whilst far from ideal, it does at least allow us some preparation to help investors soften any potential negative effects of Brexit.

Where are we going?
As things stand, at 23:00 GMT on 29th March 2019, if an agreement is reached, the UK will move into a ‘transition period’ (which appears to mean an extension of membership in all but name) until 31st December 2020. During this time the UK will still bear the costs and receive the benefits of EU membership but will no longer have a vote on EU matters. However, until we have more details, the uncertainty is likely to continue having a significant impact on business investment and consumer spending, leaving investors facing both opportunities and risks.

What could happen?
Potential outcomes are wide-ranging - from a so-called No-Deal Brexit, Hard Brexit, Soft Brexit or even a complete reversal of Brexit! But what do these options really mean?

No Brexit – Article 50 is reversed, potentially through a new referendum, and the UK votes to remain in the European Union. This outlook is unlikely since the Government has ruled it out, but a shift in the balance of power in the UK and change in political direction is not completely beyond the realms of possibility.

Softest Brexit – The UK joins the European Economic Area with access to the Single Market, including free movement of people, goods, services and capital. This would see the UK effectively remain within the EU. At present the biggest hurdle to this is Freedom of Movement for EU workers to come to Britain, which the UK government will not support.

Soft Brexit – The UK leaves the EU but retains some of its existing ties - potentially remaining in the Customs Union (the trade agreement within the EU which removes internal tariffs on goods and sets common external tariffs) or Single Market. The EU however maintains that ‘Freedom of Movement’ must apply to people, goods, services and capital and that the UK cannot ‘cherry-pick’ which freedoms to retain. This disagreement is a significant block on progress.

Hard Brexit – The UK leaves the Customs Union for both goods and services, potentially leaving Britain without trade agreements with its EU partners, and higher tariffs and tougher checks for goods moving between the UK and EU.

No Deal – A lack of formal agreement reached between the EU and UK would see a less orderly Hard Brexit with no ‘transition period’. There would be no terms on which to continue trade or the free movement of citizens between the UK and EU - we’d effectively be starting again with a blank canvas.

Although no scenario can be ruled out, the most likely outcome is an agreement somewhere between a Soft and Hard Brexit. As the situation unfolds, the markets will be less influenced by political noise, allowing the new economic environment to dictate performance.

What has Brexit done to markets so far?
UK equities (shares) make up around 6% of the total value of global equity markets, and UK government debt, at $2 trillion, is the sixth largest in the world. While this is large enough to affect investors across the globe, it’s still dwarfed by US, Japanese and EU debt, meaning the impact of Brexit on global markets is likely to be minimal. After the EU Referendum, investors across the globe became more risk-averse and even countries with minimal UK exposure, such as India and Taiwan, saw their markets react dramatically, as if they were inextricably linked to the UK economy. However, since July 2016, market moves have been more rational. We expect the economic impact of Brexit to centre on the UK, and to a lesser extent on the other countries in the EU.

Ever since the intention to hold the EU Referendum was announced on 20th February 2016, the British Pound and UK shares have been subject to overwhelming negativity. This has seen Sterling fall to its lowest level against the US dollar since 1985, while UK shares have lagged behind other leading markets. This is somewhat understandable given the highly uncertain outlook that the vote created, however since more than half of the revenues of FTSE 100 and FTSE 250 companies are generated overseas, the impact of domestic issues on these companies is likely to be limited.

GBP performance
The FTSE 100 has delivered reasonable performance over the past three years compared to other major markets worldwide. However, if comparing the same markets due to Brexit’s effect on the value of the Pound over the same period, when you compare markets in the UK’s currency, performance doesn’t look quite so strong, as the graphs show. 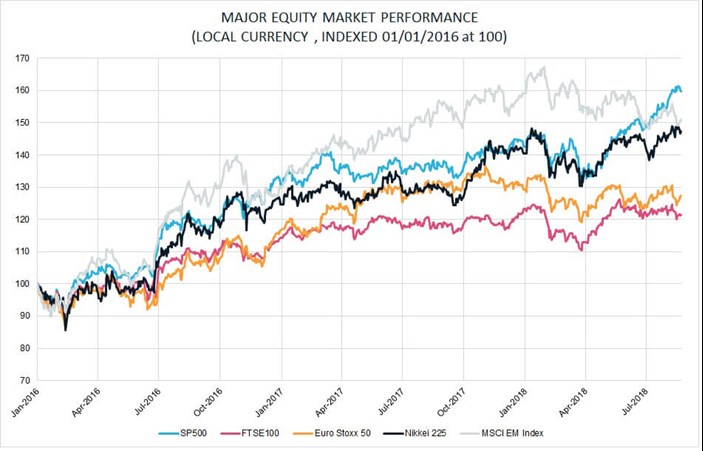 FTSE 100 performance compared to other major markets (in GBP) 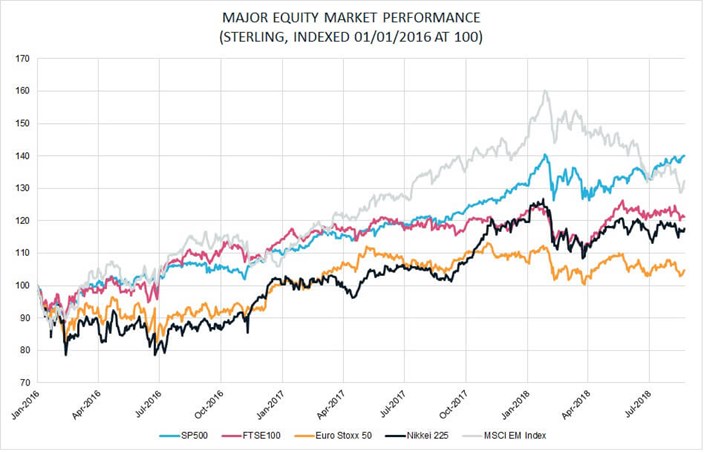 What this means for Wealthify Plans
First of all, our team of investment professionals deliberately build your investment plan so that your money is spread across many markets and investments. This means you’re not too reliant on one particular region, such as the UK, doing well in order for your money to grow. One of our leading principles has also been to avoid ‘home bias’ – in other words investing too heavily in UK markets.

We think UK government bonds (Gilts) in our plans may see some volatility in the short term whilst the uncertainty continues but will stabilise as slow economic growth drives very gradual interest rate rises.

Earlier this year we reduced the amount of UK property in our Plans, in favour of global property. The UK property sector has performed well, but we believe it’s likely to suffer more than other asset classes in the event of a difficult Brexit process.

Our current view on UK shares is neutral, since while we think they represent good value for money at the moment, but the uncertain political and economic outlook tempers this. The implication of this on our plans is we’re unlikely to increase the amount of UK shares in the near term unless the situation changes.

It’s worth remembering that a softer than expected Brexit isn’t good for all UK companies, since it could see the value of Sterling increase. This in turn would affect the profits of FTSE 100 and 250 companies, because more than half of the money they make is in foreign currencies, which would be worth less against the stronger Pound.

We remain optimistic with regard to global shares and the outlook for the wider global economy. Brexit itself is unlikely to significantly impact markets outside the EU. The world economy is far more dependent on how US-China trade relations play out and the rate at which global central banks increase interest rates. Similarly, developments in machine-led automation, self-driving vehicles or AI, could bring seismic economic change that completely offset the current trade tensions.

Until then it’s important to keep calm, ignore the noise, and resist the urge of reacting to every sensational headline. As history has shown us many times, markets will go down and up, but over the longer-term economies and business adapt to changes in circumstances. Our job as investment professionals is to remain vigilant, minimise the impact of any downturns on your Investment Plans and take advantage of opportunities as they arise.

A bumpy start to the year