Let’s be honest, it’s never nice to see markets drop, but as an investor, it’s important to remain calm and ignore the noise. Seeing markets fall is stressful, however, market downturns aren’t always bad news and there are ways that could help you take advantage of the situation. Here are some key things to consider when markets go down.

Selling your investments when markets go down
As soon as markets fall, it’s very tempting to sell investments in the hope of limiting further losses. But what if we told you that selling your investments when markets are down could do more harm than good? Seeing the value of your investments drop can be nerve-wracking, but as long as you don’t sell, the losses remain hypothetical – it’s just a negative (and scary) number on your dashboard but there’s still a chance this number could go the opposite direction if markets recover. Obviously, nobody can predict the future and there’s no guarantee of this, but historically, they’ve always bounced back, whether it was the Great Depression in the 1930s or the Global Financial Crisis of 2008-09. If you sell your investments, your losses will become real and you could miss out on future potential growth. So, when markets go down, try to keep your nerve and think about the long-term.

Remaining invested during market downturns
It may sound a bit counter-intuitive, but remaining invested during market dips could be a wise move as it could help to smooth out bumps and maximise your potential returns. For instance, if you had invested £10,000 in the FTSE 100 at the start of 2000 and remained invested until the end of 2019, you could have ended up with about £21,255, meaning your money could have grown on average by 5.4% on an annual basis (including reinvested dividends). If you had taken your money out, you could have missed some of the best days and your gain may have been much lower, and depending on how long you were out of the market, you could have even made a loss. 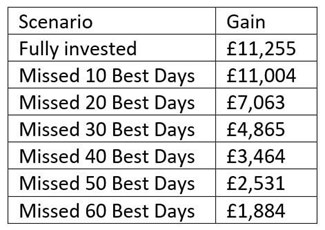 Generally speaking, sticking with your investments over the long-term, regardless of market fluctuations, tends to pay off. In fact, according to many studies, the longer you invest, the more likely you are to see positive growth. For example, people who invested in the FTSE 100 for any 10-year period since 1984 have had an 89% chance of making a positive return2.

Investing when markets fall
Well, now let’s get to the interesting (and potentially mind-blowing) part! Not everything is gloomy when markets drop. In fact, falling markets mean that investments are becoming cheaper and you’ve got the opportunity to grab bargains. More importantly, you could make a gain if the investments you’ve purchased go up in value. You might even want to consider taking the approach of investing little and often; that way you could have the capacity to pick cheap investments if they drop in price.

With Wealthify, getting your Plan topped up regularly is easy! All you need to do is set up a Direct Debit and you may be able to make the most of falling markets and the opportunities they present.

Past performance is not a reliable indicator of future results.