If they say a day is a long time in markets, then the period since our previous market update – 5 weeks – seems more like an eternity given all the change that has happened since.

At Wealthify, we don’t build investment plans based upon such short timespans; we build our customers’ plans to deliver their financial goals over the longer term. However, amidst all the recent political noise, it would be remiss not to offer market commentary at this time and flag any short-term potential impact on your investment plan.

Geopolitics is certainly throwing up more issues than usual for investors, and our customers. Since my last blog, we have another new Prime Minister (our third in eight weeks) and a new Chancellor.

Given that we build globally diversified investment plans, it’s also important to be aware of what is happening outside of the UK. Sadly, the awful war in Ukraine seems to have no end in sight, which continues to impact supply-chains and energy prices, causing inflationary pressure — as well as create a wider economical ripple effect in Europe.

In Italy, the excitement of seeing its first female Prime Minister being elected, Giorgia Meloni, is being drowned out by the fact that she is also the most far-right leader of Italy since Mussolini. In China, Xi has cemented a further term in office, and has created a new administration with an increasingly hostile position towards the US.

Oh, and let’s not forget the midterm elections coming up in the US — which seem likely to widen political divides even further.

What gives? And do you need to be worried about all this geopolitical stuff?

Geopolitics is important, and we are certainly mindful of these risks as we manage your investment plan. However, the reality is that geopolitics typically has more of an immediate, short – and sometimes sharp – impact on stock markets. Over the longer term, these short-term moves usually appear as a blip on the normal upward trajectory of stock markets (historically, that is).

As an example, recent UK experience comes to mind when, in the space of five days in September, the price of the 30-year gilt fell more than 24% (as of the date of writing, the price has thankfully returned to pre-mini budget levels). Indeed, the move was more akin to what can happen in emerging market government debt, and not what we’d expect from a Sovereign with a reserve currency status, such as the UK. 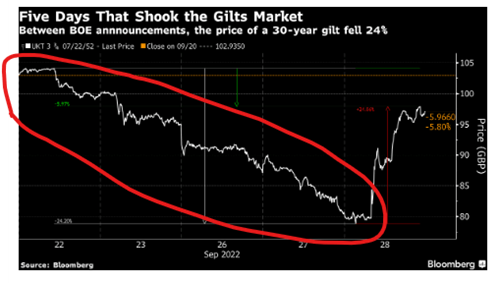 Geopolitics aside, the real game in town right now remains rising inflation and moves by central banks globally to aggressively raise interest rates to quinch it. Whilst we don’t believe we have yet reached peaked inflation, markets (ignoring specific tech stocks such as Meta) – the S&P 500, for example – are up of late — some 8% from the lows of two weeks ago.

Markets moving up always feel better than those moving down, and some analysts are pointing to the bottom for equity markets having been reached already. I should point out that we had such a bear market rally in June, and after the volatility of this year, feel less convinced we’re seeing the bottom of this economic cycle now.

We’ve been busy making changes to your plans that we believe will stabilise your performance, whilst ensuring we are positioned for growth once the markets turn. We remain vigilant to further economic turbulence, and are actively managing and monitoring risk levels, which will likely change as the data we analyse changes.

We remain comfortable that our current positioning offers some defence against possible further market declines, whilst at the same time being poised for the eventual market recovery.

In answer to the inevitable question that parents are always asked on that long car journey: “Are we there yet?”

Our experience suggests, no, not quite yet.

Please remember the value of your investments can go down as well as up, and you could get back less than invested. Past performance is not a reliable indicator of future results.

The tech behind the new Wealthify app