There are winners and losers in every Budget, but this Autumn’s fiscal event – the first of the new once-a-year system announced last year – was billed as the ‘Millennial’s Budget’, thanks to a raft of predicted hand-outs aimed at winning over so-called Generation Rent, saddled with student debt and held back by stagnant wages and unaffordable housing.

Here, we look at exactly what was in the Budget for young people (and what wasn’t!) and how millennials could gain.

Students were expected to be at the front of the queue for Budget handouts, but the Chancellor barely mentioned them. Granted, weeks before the Budget, at the Tory annual conference, Theresa May had already committed to a freeze on further tuition fee rises, fixing them at £9,250 (£9,000 in Wales) until 2019, and promised to raise the earning threshold for loan repayments from 21K to £25k for recent graduates. While both moves could prove a valuable break for some mid-earning graduates, they won’t come into force until 2018, and it all looks somewhat less generous when you recall that student loan interest rates shot up to 6.1% in September. Predictions that Phillip Hammond would use his budget to soften the blow of this inflation-linked surge failed to materialise, meaning students face a high cost of borrowing to fund their studies.

Affordable housing is a hot topic for millennials struggling to buy their own home. As well as pledging £44bn to build 300,000 new homes and help an extra 135,000 people onto the ladder by 2021, the Chancellor has taken the bold step of abolishing stamp duty for first-time buyers on properties worth up to £300,000. That’s a £1,960 saving1 for someone buying an average-priced home (£223k) in the UK. Not forgetting homebuyers in more expensive regions, the 0% duty also applies on the first £300,000 of properties worth up to £500,000, helping those particularly in the South East and London.

The cost of travel is rising faster than wages in the UK, causing a blow to everyone’s pockets, not least the younger generation. The Chancellor’s solution is to extend the Young Person’s Railcard discounts to anyone up to the age of 30 (currently it’s open to 16-25s) from spring next year, offering up to a third off travel. Dubbed the ‘millennial railcard’, it could provide significant savings to some regular travellers, although it will be of little use to commuters, as the discounts only apply to off-peak travel. Frequent flyers may also welcome the freeze on air passenger duty.

One of the headline policy announcements in this Budget was expected to be an £1000 increase in the personal tax allowance, bringing forward the Government’s 2020 target. However, this failed to transpire, instead rising by just £350 to £11,850. It’s still a tax-free bonus for everyone, but not the early Christmas present some hoped for.

Far more significant for young people may be the 4.4% rise in the National Living Wage to £7.83 an hour, giving full-time workers a welcome £600 a year2 pay increase.

How much better off they’ll be depends a lot on people’s individual circumstances, but most millennials should at least feel that this Budget is taking notice of them and providing a helping hand towards a more comfortable financial future. And it’s high time too, we say!

Make the most of your Budget wins

If there’s one advantage millennials have over older generations, it’s their youth. Time is a valuable asset when it comes to saving for the future and young people gaining financially from this Budget might do well to consider committing some of their new-found disposable income to long-term savings, where it will benefit from the positive effects of compound interest. Better still, if they’re willing to take some additional risk, and already have a good cash reserve, they could start an investment plan and put their money to work on the global stock markets. Starting a medium-risk investment plan at age 20 and putting in just £40 a month could grow to almost £40k by their 50th birthday. Wait until age 30 to start investing, on the other hand, and it might only be worth around £18k. 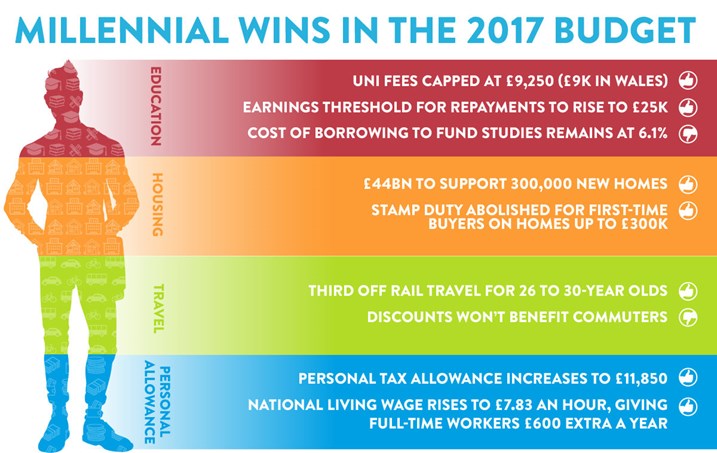 Predicted values are for illustrative purposes only and are calculated using ARC benchmark data which comprises data on the past performance of hundreds of comparable private investment plans. Past performance figures are not a reliable indicator of future returns. With investing your capital is at risk and you may get back less than you put in.