As we move into the sixth week of Boris Johnson’s leadership, the pound has been on a dramatic rollercoaster. Across the investment market, UK companies have seen in our opinion an excessive level of pessimism given their global outlook.  Here at Wealthify, we want to share an overview of the recent impact of Boris’ leadership for investors. 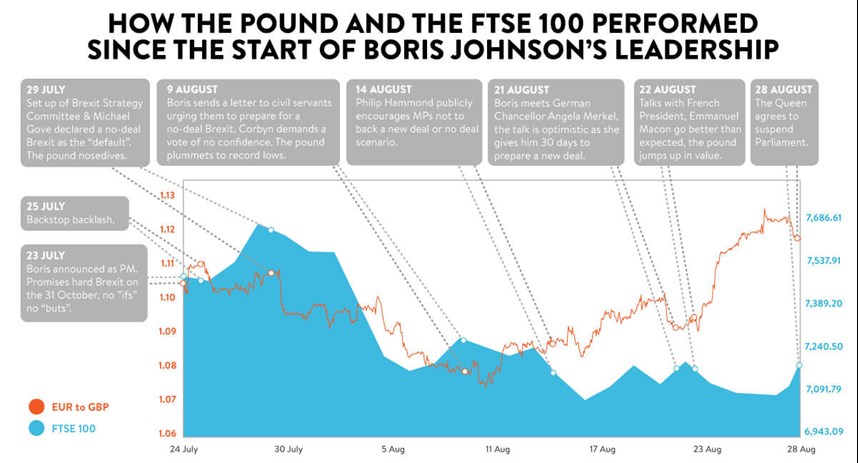 Boris Johnson and the value of the pound
It’s been full of ups and downs, but overall the pound has lost value since Boris Johnson came into power. We can clearly see that there is a tendency for the pound to decrease when a no-deal scenario looks more likely.

However, when politicians talk about a more constructive approach to the future EU-UK relationship the pound picks up again. For example, on the 22nd of August, Boris Johnson and French President Emmanuel Macron made a joint statement to the world, expressing optimism on both sides, and even some laughter, the two leaders left a reassuring impression that a deal will be struck. This followed an equally successful talk with German Chancellor Angela Merkel on the previous day, and as a result the value of the pound drifted upwards.

Then on the 28th of August, the Queen agreed to suspend Parliament. This dramatically cuts short the time that MPs have to prevent Brexit with legislation. Although the pound has edged lower, it has not plummeted as some commentators’ reactions might have indicated was the case.

How has the new leadership affected the investment markets?
Well, to get an overview of the British markets, it’s always a good idea to look at the FTSE 100. This stands for the “Financial Times Stock Exchange” (often called the “footsie” 100). It tracks the performance of the 100 largest (or “blue chip”) UK companies, worth more than £2 trillion combined. You can see a breakdown of FTSE 100 performance and sectors in this factsheet.

Many FTSE 100 companies generate their income outside of the UK, and in other currencies. This makes the FTSE100 less sensitive to British politics than the more domestically focused FTSE-250 for instance. However, the suspension of parliament is the most likely cause of the recent drop, as investors dislike uncertainty. But remember, if you want to ride the bumps, it’s important to think long-term and remove emotions from the equation. In the long-run, investing tends to pay off.

Boris’ leadership so far has seen mixed market moves for different UK businesses. In terms of sectors, aerospace and defense have consistently outperformed other companies (in the FTSE 250), by around 20%. Another winner is mobile communications which have increased their share price since his leadership. To some worldwide amusement, some of the best performers have been British pubs after the sector saw investment from Hong Kong’s richest man and Entertainment One’s Peppa Pig franchise was bought by Hasbro. These investments reflect the fact that UK still holds an attraction for overseas investment.

On the other side of the fence, sectors which have decreased in value directly since Boris’ leadership include automobiles, forestry and metal. These types of companies may lag until there is a greater sense of direction around the post-Brexit trade agreements.

What next?
Prime Minister Boris Johnson has enough charisma to bring a smile to world leaders such as Emmanuel Macron and Angela Merkel – can he secure a workable deal before the end of October? This is the question that investors and businesses are asking themselves. What will the UK’s relationship be with the EU and more importantly from a trade perspective the rest of the world.

As more and more political events unfold, it’s important to continue thinking long term, with a good mix of investments in your plan to help shield against market fluctuations. Find out more about the impact of market ups and downs on your investment plan here.