Why does it feel like the election comes around more than every four years?

While the US presidential election occurs every four years, it can feel like presidents or potential presidents, never stop campaigning.

The US has a two-party political system, similar to the UK with Conservatives and Labour. The two main parties in the US are the Republicans and Democrats, accounting for around 95% of popular vote in the 2016 election. And that’s not all  - between them they won all seats in the House of Representatives, which acts like the House of Commons in the UK but with two-year election terms, and all but two seats in the Senate (a bit like an elected House of Lords with staggered six years terms).

So, given their dominance, we’ll focus on the economic policies of these two parties.  Generally speaking, the Republican Party or Grand Old Party (GOP) favour smaller government, less regulation, and lower taxes, whereas the Democrats or Dems, prefer a more active government with higher taxes.

The 3rd of November 2020 will be the 59th US presidential election. The candidates are the incumbent, President Donald Trump and Vice President Michael Pence, who will face former Vice President, Joseph Biden, and the California Senator Kamala Harris.

The US presidential election isn’t a simple countrywide popular vote but rather a state-wide popular vote, where the individual states are worth “votes” within the electoral college. Confused? Don’t be!

Firstly there are three parts to the US government: the Legislative (Congress) and Executive (White House) which are elective, and the Judical branch who are mostly appointed. For the sake of this article, we’ll only focus on the first two.

Figure 1: 3 branches of US government 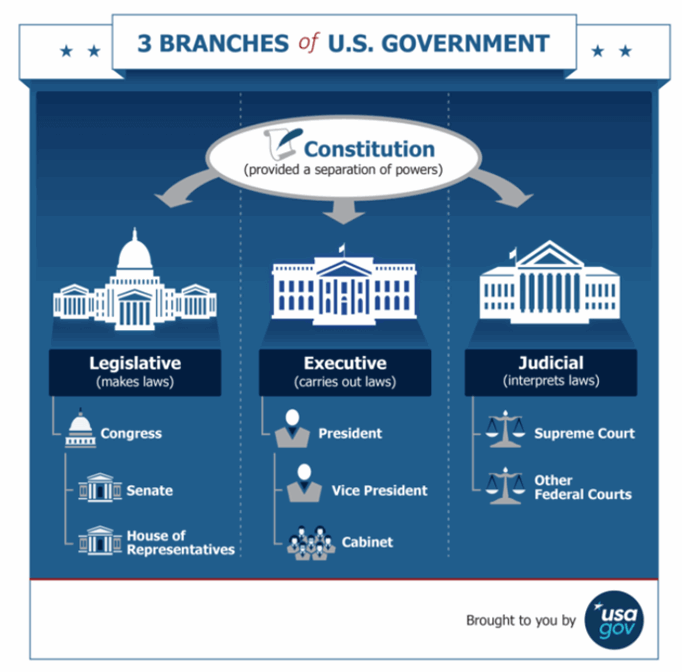 How does the President get elected?

You may or may not have heard of the ‘Electoral College’. If you haven’t, then it's essentially a group of electors from each state who vote on behalf of that state. So, Americans aren’t actually voting for the candidate, they’re voting for electors who will then choose the candidate on their behalf. Then the candidate with the most votes in the electoral college is elected President.

Within the electoral college, each of the United States’ 50 states and the District of Columbia (DC) are worth a number of votes, with the state with the largest population, California, being worth 55 votes., Texas is the next most populated state worth 38 votes, all the way down to the least populated seven states (and DC) being worth 3 votes each. The votes for all states and DC total 538. This provides the inspiration for one of the most useful websites on this topic - https://www.270towin.com/.

Figure 2: The forecast Electoral College (note forecasts can prove to be incorrect). 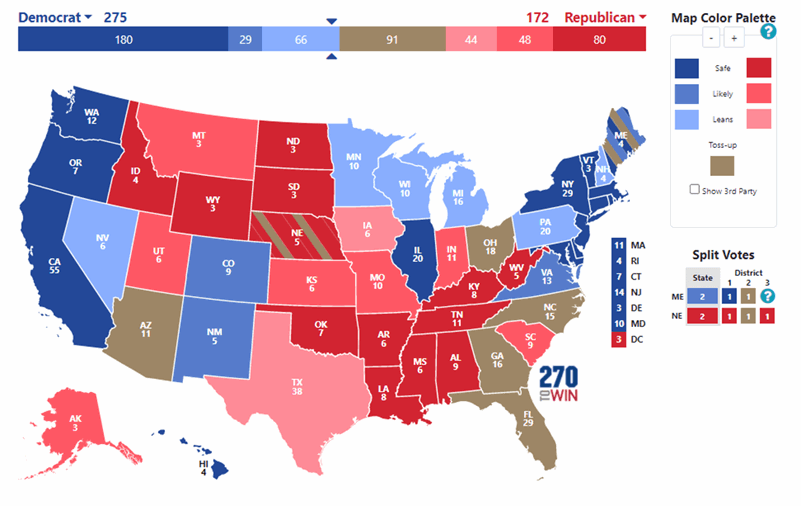 Who else is up for election?

It’s not just the president who is decided in the election. The entire House of Representatives, all 435 seats, are up for election as they are every alternative year. At present, the House of Representatives is dominated by the Democrats, with very few commenters expecting that the  Republicans will be able to reach the required 218 seats to claim a majority. However, this is the “Lower” House, similar to the House of Commons in the UK.

This means, that come election night, the Republicans will be more focused on the results coming out of the Senate. 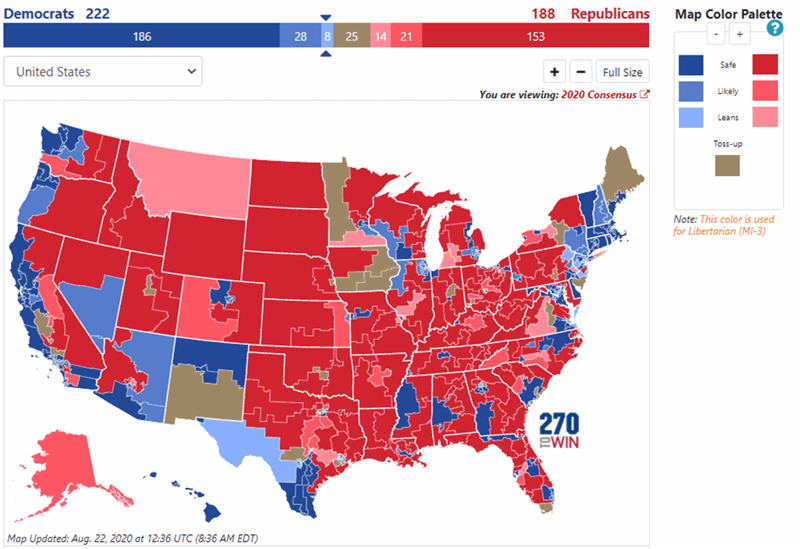 However, since the Senate runs on a six-year election cycle, this means that one third of the senate is up for election every two years. Many of the seats that are being contested are seen as largely safe, with only six seats currently identified as being “up for grabs” or a “Toss-up” indicated by the brown marking below. However, at present, those six seats are likely to decide who controls the “Upper” House, which is similar to the House of Lords in the UK.

Figure 4: The Senate has much lower turnover 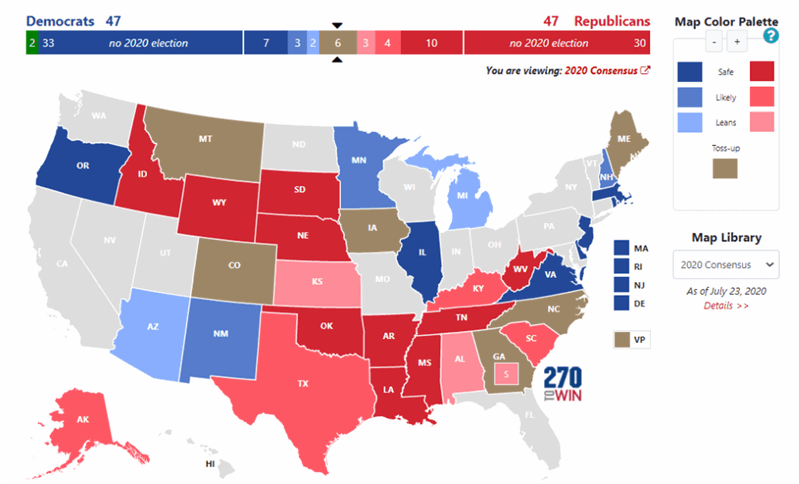 There is still a long way to go. What should I be looking for?

There are three presidential debates and one vice presidential debate that take place between late September and late October, which should bring more details on the policy plans of both parties. President Trump has proven less predictable than many other presidents, not least with his negotiating strategies, but it is not expected that there will be a significant softening of the tone should Joe Biden be elected.

The big impact on market sentiment will come from the line taken both on US-China relations, but also between trade relations more generally. However, there remains a significant difference between the tax plans of the two parties, with the Democratic party committed to a partial re-raising of the corporate tax rate which was cut from 35% in 2018 to 21% where it currently stands to 28%.  There is also likely to be legislation that would raise income tax on higher earners in the US, part of which would be used to fund infrastructure investment and a scaled-back version of the so-called Green New Deal. We would anticipate that any infrastructure deal would be larger under a Democratic president, with the scale determined but the level of support available in both parts of Congress.

There are also several policies that would be less favourable for corporates should the Democrats see a so-called “clean sweap”, which would involve them winning the House, Senate and Presidency. These policies are increasing the minimum wage to $15 an hour, which would likely see a decline in corporate profits, greater regulation or even the break-up of the larger US tech firms, but also an increase in government involvement in healthcare. (https://joebiden.com/joes-vision/#) President Trump has essentially promised more of the same, with further tax cuts and an infrastructure plan key to supporting economic growth.

What could these scenarios mean for investors and the economy?

Figure 5: What could these scenarios mean for investors and the economy? 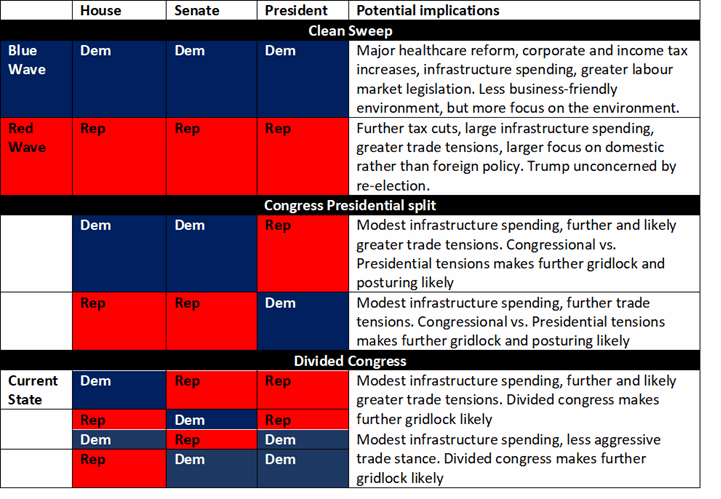 What does this mean for markets?

Financial markets famously dislike uncertainty, which should ease once the election result becomes known. A clean sweep for either party could potentially be negative for the stock market given the costs to the corporate sector of the Democrat’s progressive agenda and the economic cost of further trade tensions with China (and potentially the European Union amongst others) should the Republicans win a clean sweep. It is important to remember that typically much of the political rhetoric and posturing will not result in significant action, because to pass legislation requires agreement across party lines. Every four years a presidential election will occur in the US and the outcome of an election should not be the defining characteristic to portfolio performance, particularly ones that are well diversified.