If there was one word to describe this year, it would be unprecedented. The world has seen more than 75million confirmed Covid-19 cases, with over 1.7million lives being lost to this deadly virus. It’s hard to look back at this year in terms of markets and economics without first thinking about the human impact and toll this year has taken on many of us. From all of us at Wealthify, we hope that your 2021 is safe, and our thoughts are with those affected by the virus and the heroes working on the frontline.

2020 was the year the world shut down. Across the globe we saw governments close much of their economies, and flights were grounded – dropping to around 70% year-on-year at their peak[1]. We self-isolated, ate out to help out[2], and closing schools[3] wasn’t a cause for children to celebrate. But it hasn’t all been bad. We’ve also seen ethical investing becoming mainstream, with greater demands for social and environmental changes only accelerating. There has also been plenty of the structural changes such as remote working[4], and automation helping many of us do our jobs from wherever we are.

The impact and recovery
Although we’re yet to see the full impact or a recovery from Covid-19, 2020 has been hit hard by the changes it has brought. The lockdowns associated with this pandemic, for example, are expected to subtract around 4% from the GDP (Gross Domestic Product which calculate the value of goods and service a country produces) around the world in 2020. But on the bright side, forecasts of a global recovery are expecting to see an increase of around 5%[5].

There has been a lot of discussion about what the shape of the economic recovery would look like. Popular theories range from V, U, W, L with Z, Swoosh[6] and even a K[7] shaped recovery, but the only way to describe the financial markets’ recovery was a V.

It’s been an odd kind of year, as not only was it the first government manufactured recession, but the lockdown measures that were enforced saw record economic contractions in Q2 (April to June), followed by record expansions in Q3 (July to September) as these measures were eased.

The recovery has been largely influenced by two key factors that have contributed to the market rally. These helped in a time where the global economy saw the deepest contraction since World War II[8].

Fiscal packages have ranged widely (Figure 1) both in their amounts and structure. Some countries have focused on loan guarantees to support businesses with Germany, Italy, and Japan providing these in excess of 20% of GDP, while Australia, Canada, Singapore, and New Zealand all saw fiscal spending - much of it in the form of either additional unemployment benefits or government furlough schemes - of more than 10% of GDP. This support has caused significant budget deficits, although given the low level of interest rates and the need for immediate action there’s been little concern expressed by governments or shown by markets. 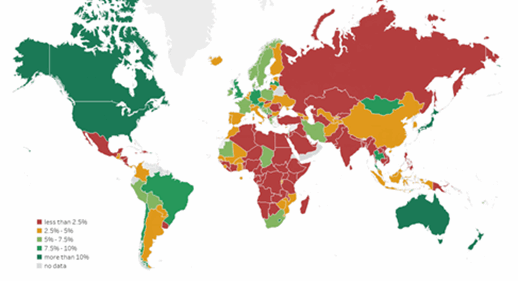 Central banks also acted quickly and continue to be committed in providing support to achieve their remits[9] and goals[10]. The US Federal Reserve cut their policy interest rate (federal funds target rate) by 150bps (1.50%) to 0-0.25% in the first few weeks of March, and the Bank of England cut their policy rate from 0.75% to 0.10% during the same period. But with interest rates already at zero, or slightly below in the case of the European Central Bank, Swiss National Bank, and Denmark, global Quantitative Easing - where central banks purchase financial assets (e.g. government bonds) - was reignited[11] to provide additional support and halt any rise in longer-term interest rates while underpinning financial market sentiment.

Governments provided support to both businesses and consumers now (via fiscal spending) and taking the tact that they will worry about paying for it later. Across much of the world this was provided through schemes, which paid a proportion of workers’ wages, so that company didn’t have to lay them off, and/or providing businesses support via loans[12].

The Second Factor: markets boosted since early November by vaccines
While governments and central banks helped to bolster financial markets, the follow through boost came in November by the swift[13] and successful Covid-19 vaccine trials. These were followed by the start of vaccine roll outs across China, Russia, Canada, the United Kingdom, European Union, and United States, amongst others. However, it is worth noting that the appetite for the vaccine ranges significantly, even in Western Europe. For example, in the UK only 15% of people say they wouldn’t have the vaccine, but in France 41% said they wouldn’t[14]. 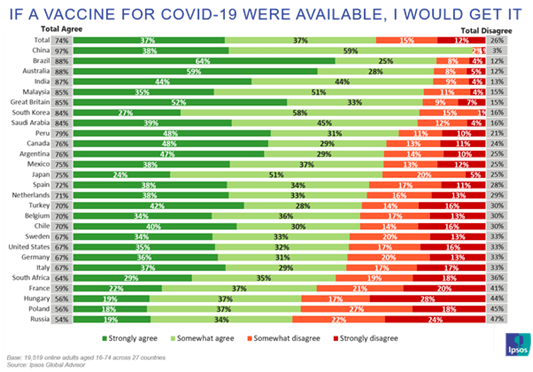 US election
There was also the small matter of the US election. The eventual Democratic nominee, Joe Biden, was notably more market-friendly than Elizabeth Warren or Bernie Sanders, but crucially for financial markets the expectations are that while the Democrats control congress, they do not have a so-called “Super Majority” in the Senate. This would need one party to have 60 out of a 100 Senators- whereas both parties have 50 with the Democratic Vice President Harris having the deciding vote in the event of a tie.

So, while the Democrats technically control Congress, they will still need to work with the Republicans and any changes will need to be palatable to both political parties.

Brexit
Since the 23rd of June 2016, when the United Kingdom voted to leave the European Union, there have been several sticking points, not least a future trade deal with the European Union. There have also been serious issues ironing out deals over trade in goods and services, Fishing Rights, resolution of any future disputes, and the rights of EU and UK citizens residing in other countries.

So, while the UK formally left the EU at the end of January 2020, all of the rules and most of the obligations have continued to apply since. However, a trade deal was agreed just a week before the transition period between the UK and EU ended and therefore avoided a so-called Hard-Brexit. The outcome of a Brexit deal is a bit too much to include in a year in review, so we’ve created a separate article to provide more detail on what the Brexit Deal means for the markets.

How our Plans did
2020 was a year of extremes, with investor sentiment yo-yoing aggressively as central bank and government action provided their commitment to support the economy. This saw the quickest stock/equity bear market, and also became the shortest bear market. Bond markets also benefited during this time, as additional Quantitative Easing and Central Banks’ action made it clear there is little chance they will be raising interest rates in the near term. Despite the ongoing economic difficulties, this saw all our portfolios end the year in positive territory, with our Ethical Plans outperforming their Original counterparts. You can read more about our 2020 Plan performance here.

Past performance is not a reliable indicator of future results.