"A cynic knows the price of everything and the value of nothing." Oscar Wilde

This time last year, you may recall there was something of a media craze about investing in Bitcoin. What a difference 12 months can make.

Whilst Bitcoin remains the largest cryptocurrency by value according to coinmarketcap.com, its price has declined in a spectacular way, plummeting from a high of $20,089.00 on 17th December 2017 to just $3,545.86 on 17 December[1] a year later. Whilst some investors still see Bitcoin as a buying opportunity, we’ve decided to leave Bitcoin and other cryptocurrencies well on the side-lines. Here’s three reasons why…

It’s hard to value
A share gives you ownership of a small piece of a company. A bond, in its simplest form is a loan to a company or government. In other words, there’s something physical and tangible behind your investment. But what does Bitcoin entitle you to? The St Louis Federal Reserve published a reserve paper earlier this year saying that ‘Bitcoin has no intrinsic value, but then neither does the US dollar, Euro or Swiss Franc’. We would disagree with the second part of this statement. You can’t pay your taxes with Bitcoin, but you can pay with any of the other government-backed currencies above. Consequently, unlike shares and bonds, there’s no reliable way to determine the REAL value of Bitcoin and other cryptocurrencies, which makes it a risky investment.

It’s more about speculating than investing
There is no denying that Bitcoin and other cryptocurrencies have seen a dramatic rise over their lives. However, your success or otherwise depends entirely on timing. If you bought Bitcoin when it was trading at one US Dollar, then you may still be up by around $3,500 today. If, on the other hand, you bought at its peak, each Dollar you invested would now be worth about 18 Cents. Such a dramatically unstable market price puts Bitcoin closer to speculation than investing – something we are not in the business of. And, while some new cryptocurrencies are backed by so-called hard currency, there is little reason not to simply hold the hard currency directly rather than via cryptocurrency.

It presents some serious risks
Bitcoin and cryptocurrencies in general have been troubled by their fair share of regulatory issues. In several jurisdictions, mining cryptocurrencies is illegal and in others, the banking sector has blocked attempts to exchange it for legal currency. Even where cryptocurrencies are legal, there are additional tax complications to negotiate, surrounding what kind of investment cryptocurrency is classed as in that country and whether you purchased it, or mined it yourself.

Nonetheless, Bitcoin is still very popular – more so in fact than Meghan Markle according to the Google search trends shown in the graph below. However, this buzz is largely derived from the network effect – i.e. the more people that use Bitcoin, the more people will use Bitcoin. Similar to the way in which FriendsReunited was usurped by MySpace, which was then overtaken by Facebook, Bitcoin could be overtaken by a superior cryptocurrency, in time.

Finally, there have been some well documented Bitcoin heists, notably leading Bitcoin exchange Mt. Gox in Tokyo from which around 740,000 Bitcoin was stolen during a major cyber-attack in 2014. With no investor protection against such threats, the risk of similar raids cannot be discounted and adds further to price instability. 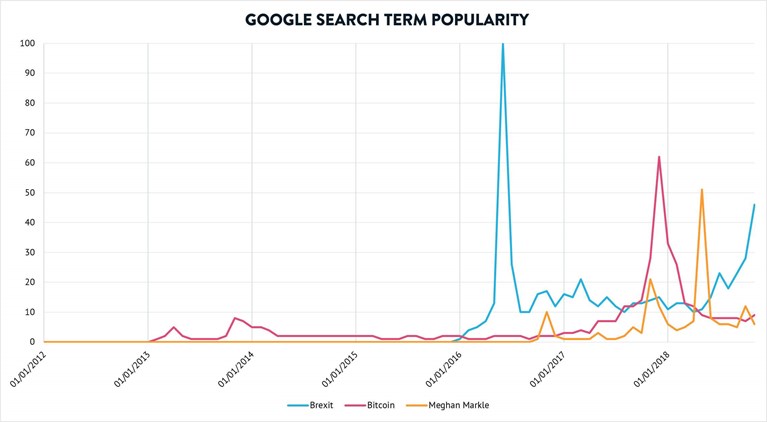 Even ignoring all of the contributing factors above, Bitcoin’s price has been exceptionally volatile to say the least (see graph below). This kind of volatility, and the unpredictable nature of the moves simply makes it incompatible with our investment philosophy and process. 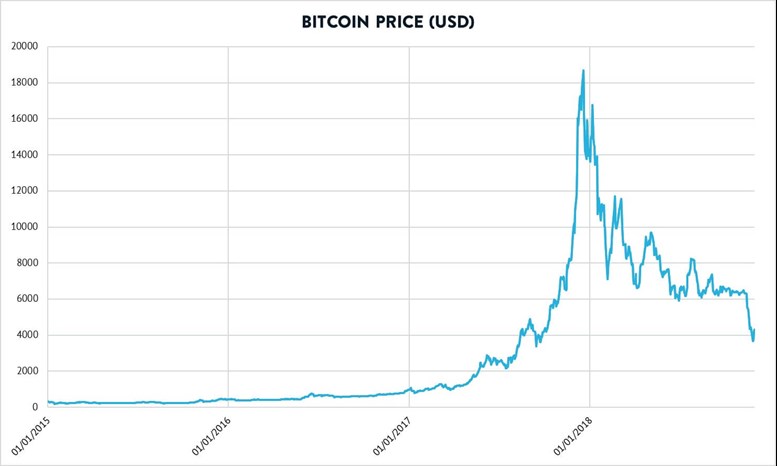 Investing in shares and property

What is low market volatility?

A beginner’s guide to investment funds

Can you lose more money than you invest in the stock market?