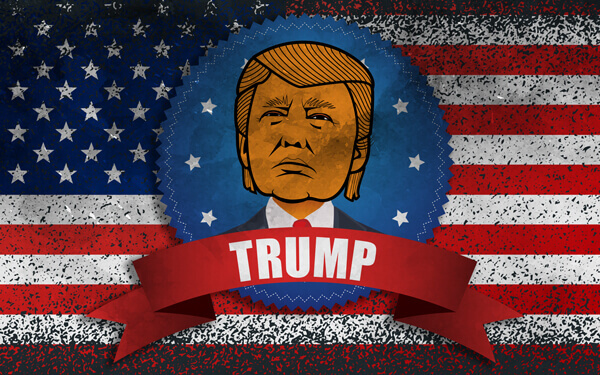 Five ways Trump could spell trouble for the stock markets

Real estate mogul and TV celebrity, Donald J. Trump is just days away from an election that could see him achieving the unthinkable - becoming the next President-elect of the United States of America.

As the world holds its breath in anticipation, Wealthify’s investment experts take a closer look at what the inauguration of President Trump would mean for global stock markets.

Negative Sentiment: lots of things can influence how the stock markets behave. One of them is known as ‘sentiment’, in other words, how positive or negative are people feeling and how it affects their actions. Trump becoming president is likely to cause a fair amount of worry about the future amongst people around the world, which will have a knock-on effect on markets as individuals, brokers and businesses rush to sell stocks.

Questionable track record: despite his boasting about what a good businessman he is, Trump has several failed enterprises to his name and has filed for bankruptcy on at least four occasions. What’s more, while contemporaries such as Bill Gates have grown their fortunes by over 7000% since the 80s, Trump has only managed 300%, meaning if he’d simply invested his fortune in an S&P 500 tracker fund, he’d now be twice as rich as he is, by doing nothing. None of this reflects well on a man applying for the job of being in charge of the world’s largest economy and with him at the helm, investors around the world may think twice before buying US-based investments.1

Immigration Policies: “Trump’s Wall” threatens to cut off a vital supply of cheap labour into the US, which could have the opposite of the intended effect and severely weaken the economy by making it more expensive for business to operate, affecting profit and growth expectations amongst many US companies, particularly in the manufacturing sector. Since economic growth expectations strongly influence the sentiment in the stock market, it could spell more trouble for US-based investments.

Uncertainty: with Trump in the Oval Office, the future will be less certain for everyone. With uncertainty comes risk and a higher cost of borrowing for US companies, as investors will demand a higher return on their loans in exchange for the greater risk. Higher borrowing costs for businesses means lower profits and lower profits mean plummeting stock prices.

Nationalism: Trump wants to make large US companies bring their operations back to the US and give the jobs to Americans, but that will lead to an increase in operational costs, since a US employee is able to demand a higher daily wage than their equivalent in China. Combined with a lack of available cheap labour, courtesy of Trump’s wall, operating costs for businesses will sky-rocket, profits will fall and some businesses may even be forced into administration, leading to a rise in unemployment – which is, ironically, exactly what Trump’s policy is trying to tackle and spells more bad news for the stock markets.

Trump is a wild-card in all respects, so it's unclear which, if any, of his proposed policies will come to fruition if his White House bid is successful. What’s certain is that individual government policies can have a huge influence on the stock price of specific companies, which makes the task of picking stocks all the more difficult for investors looking to adjust their portfolios in anticipation of the election outcome on 9 November.

The advantage of using a managed investment service like Wealthify is that you have experts monitoring the global markets daily and adjusting your investments to optimise your returns during events like the US election. Cash balances across all plans are fairly high at the moment, so should there be any dip in prices, we will have the resources available to snap up investments at a cheaper price. Your risk is also well spread out, across different investment types, currencies and countries, so your eggs are never in one basket. We buy mostly passive investments for your plan, which are the best approach if you want to ignore short-term market choppiness and invest for long-term, steady growth. So, whether there’s a Trump or another Clinton in the White House, as a Wealthify customer you can ignore the noise and rest assured that your money is being managed in the best possible way.

Try it now With investing your capital is at risk
Try investing with Wealthify
Share this article on:
Next article
What would 0% interest rates mean for you?
Previous article
The best and worst robots from science fiction